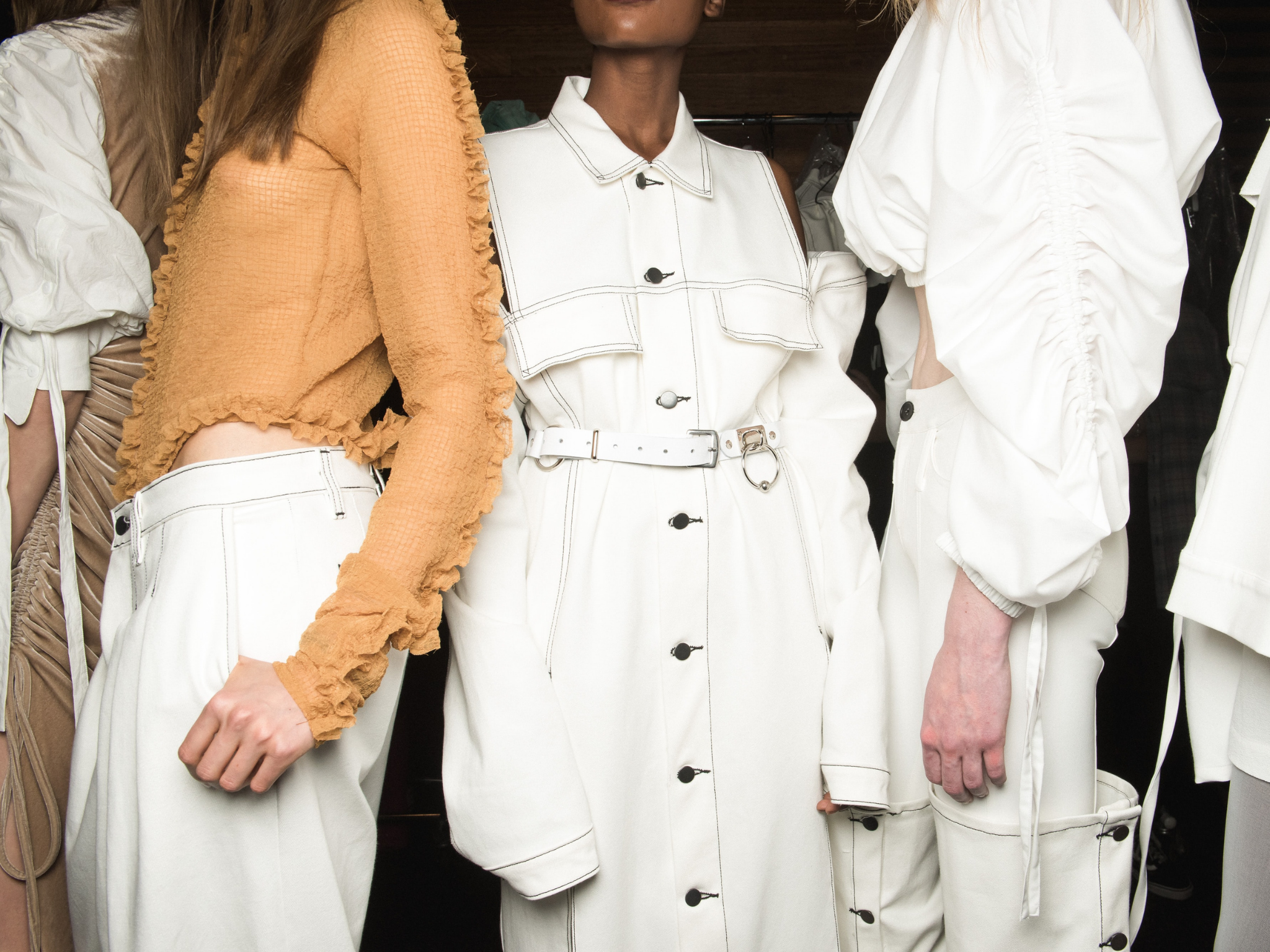 Ordinarily, ahead of the September fashion weeks, we would be wondering about the clothes. Where hemlines might fall this season. Which designers will be the toast of the town. How boho will be reimagined for the thousandth time. But this is 2020, a year like no other, and so the question mark hovers not so much over the collections as the events themselves.

CGI runways? A socially-distant ‘FRow’? Bikes between shows instead of taxis? Air-kissing swapped for elbow-bumps and champagne subbed for alcohol hand gel? As the world gradually emerges from the disaster that will define a generation, the fashion calendar must restyle itself for a post-pandemic world.

There’s no doubt we are witnessing a pivotal moment for the global textile industry. Clothing sales plummeted during lockdown, with Business of Fashion predicting as much as a 30% year-on-year contraction in global revenue during 2020. At the same time the pandemic has served to expose some shocking behaviour from many fast fashion giants – including $40 billion worth of orders cancelled with factories in Bangladesh and garment workers in the UK forced to work throughout lockdown, some paid as illegally low as £3.50 an hour.

As for fashion weeks, environmental campaigners like Extinction Rebellion have been calling for an end to the lavish rituals since long before Covid-19 halted proceedings. Fashion tech company ORDRE has calculated that the industry emits 241,000 tonnes of CO2e per year purely through the travel associated with the quarterly fashion months in London, New York, Paris and Milan – equivalent to the electricity used by 42,000 homes for a whole year. That’s before we factor in garment manufacture, excess fabric and stock, the construction of elaborate sets that are barely used for 20 minutes at a time and the invitations, PR gifts and parties used to oil the cogs of the fashion machine.

But while many see the past few months as a long-overdue reckoning for one of the most toxic and exploitative industries on the planet, there is hope on the horizon too. Many brands have spoken of the pandemic as a window of reflection and a chance to catch their breath, take stock and consider ways of doing fashion differently. Redesigning the status quo shouldn’t be so hard for luxury labels, after all; they already do it up to eight times a year.

One of the simplest and most impactful changes we’ll see to Fashion Weeks are fewer of them. In May, Gucci became one of the first fashion houses to announce it was scaling back its catwalk presentations – from a relentless programme of cruise, couture, pre-fall, menswear, spring/summer and autumn/winter shows to two ‘seasonless’ and co-ed collections per year. “Above all, we understand we went way too far,” wrote the brand’s creative director Alessandro Michele in a lengthy Instagram post. “Our reckless actions have burned the house we live in. We conceived of ourselves as separated from nature […] So much outrageous greed made us lose the harmony and the care, the connection and the belonging.”

Other brands have followed suit in streamlining their schedules. In May the Belgian designer Dries Van Noten released an open letter calling for the industry to slow down, to move the A/W and S/S shows back into the appropriate season, to reduce fabric and inventory waste and avoid travel by using more digital showrooms. Among the hundreds of signatories are big industry players such as Mary Katrantzou, Erdem Moralioglu and the Butterfly Mark Certified brands Anya Hindmarch and Gabriela Hearst. The latter, which regularly uses deadstock fabric in its collections, made headlines by staging the world’s first carbon-neutral runway show in 2019.

Now, with lockdown eased but life still far from normal, this month will see the scheduled fashion weeks return with a cautious mix of physical, socially-distanced events, purely digital presentations and so-called “phygital” experiences that merge the virtual with the IRL. Womenswear and menswear weeks will also be merged, a logical step in sync with the move towards more gender-neutral collections. New York’s runways will have little or no spectators, while London’s biggest brand, Burberry, will brave the weather with an outdoor show that strives to be both Covid-safe and environmentally-friendly.

“As humans, we have always had a deep affinity to nature. We have had to respect and rely upon its power for our very existence,” said creative director Riccardo Tisci. “Especially recently, we have all yearned to reconnect again and for this show, I wanted to celebrate these feelings by bringing our community together in a creative experience that takes place within the beautiful, natural landscape of Britain.” As it has for the past decade, Burberry will stream the whole show online.

Digital shows have many advantages in the current climate. They’re undeniably more accessible, throwing open the previously iron-clad doors of high fashion to let anyone with an internet connection join in. And while livestreaming a traditional runway show has sometimes felt underwhelming in the past, VR and 3D technology provides opportunities for designers to elevate their collections and let their imaginations run riot. Leading the way is the fully-digital Helsinki Fashion Week, which ran from 27 July to 1 August. Fantastical CGI settings included an underwater paradise, a giant celestial chessboard and a ‘Vatican in the clouds’ complete with graffiti-covered pillars.

But while virtual shows might be safer, they aren’t automatically more sustainable. The carbon emissions from the world’s information and communications technology sector are about on a par with the aviation industry, while exciting new tech can fall into obsolescence at an alarming pace – meaning that the invisible infrastructure needed to stage a digital fashion week, from video production to data centres and internet servers, has the potential to be toxic too. Tech company Normative will soon publish a report on Helsinki Fashion Week’s carbon emissions, but early indicators suggest that the overall impact on the environment might be higher than its physical equivalent. Although the overall footprint could still work out lower, because many more people can attend and footage can be used indefinitely.

Even among digital’s most fervent advocates, there’s a general feeling that virtual-only fashion weeks are not the long term answer. A screen can never fully replicate the immersive experience of watching a catwalk show live. Fashion is a sensory medium, after all – buyers like to get up close and personal with the stock they’re buying, to understand colours and textures and the way a fabric falls. Consumers would seem to agree; despite the decline of wholesale and the seeming ubiquity of the online haul, more than 80% of transactions in the fashion industry still take place in physical stores.

As Ralph Toledano, president of the Fédération de la Haute Couture et de la Mode, told Vogue back in June: “Nothing will ever replace the unity of time and place. Shows are a major component of the fashion industry, and this will remain…. Physical events will always have our preference.”

Instead, we’re likely to see tech working alongside more traditional showcases, while brands endeavour to strip down their offering and clean up their act. French events company Bureau Betak, which orchestrates hundreds of fashion shows across the world each year, has recently received ISO 20121 certification – an international standard for eco-conscious events which will see the company commit to 10 ‘green commandments’ including a zero single-use plastics policy, recycling and redistributing 100% of event waste, reducing its CO2 emissions by 25% and offsetting 100% of those emissions. Bureau Betak unveiled its new approach back in February with a show for Kenzo, featuring a network of giant plastic tubes which the brand vows will be re-used again and again and again.

“The consumer mindset was already showing signs of shifting in certain directions before the pandemic,” says Business of Fashion, which signposts a “growing antipathy” towards wasteful and unsustainable practices. “Some of the shifts we will witness in the fashion system such as the digital step change, in-season retail, seasonless design and the decline of wholesale are mostly an acceleration of the inevitable — things that would have happened further down the road if the pandemic had not helped them gain speed and urgency now.”

While nobody would have wished the events of the past six months on anyone, Covid-19 has issued fashion week’s most important invite; an invitation to change. To slow down, strip back and take stock. The bolder brands are now in redefining the runway experience, the brighter fashion’s future can be.